BRYSON CITY – The JV Braves (3-0) have a flair for the dramatic.  For the second week in a row, they sealed the game with less than two minutes left.

“It’s a great atmosphere for a big game,” said JV Braves head coach Chris Mintz moments after their victory.  “Both teams gave it their all.  They didn’t quit, and we didn’t quit.  It was a pretty special game.”

Swain got the ball first in the game, but the Braves defense came in fired up and held them to a three-and-out.  The Braves started their first drive at their own 30-yard line, but Swain’s defense held tight – a common theme for both teams throughout the game – and Cherokee had to punt following a three-out-out. 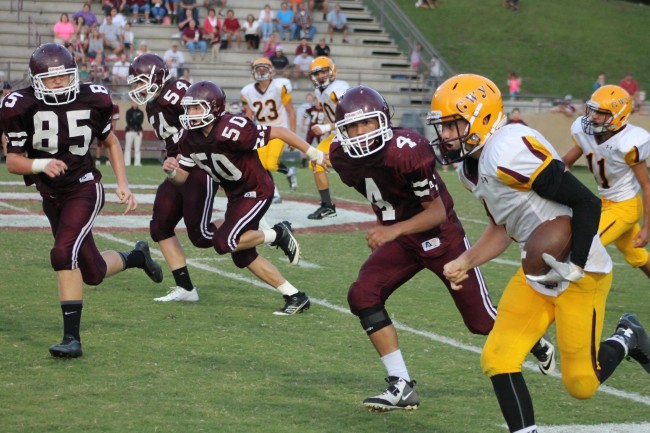 Tye Mintz (#1), JV Braves quarterback, runs past a slew of Swain defenders en route to a 64-yard touchdown run in the third quarter of a game at Swain on Thursday, Sept. 18. The score put Cherokee ahead by eight points. (SCOTT MCKIE B.P./One Feather photos)

Swain started its second possession of the game midway through the first quarter at its own 34-yard line.  Several plays later, Keshaun Beaner ran 20 yards to the Cherokee 42-yard line for a first down.  Two plays later, Shane Swimmer ran 33 yards for an apparent touchdown, but it was called back for holding.  The Maroon Devils continued to drive though, and Beaner found the end zone on an 8-yard run several plays later.  The two-point conversion failed and Swain led 6-0 at the 1:08 mark in the first.

Cherokee would strike back quickly.

Following the kickoff, the Braves set up shop at their own 42-yard line.  Tye Mintz, JV Braves quarterback, kept the ball on first down and ran 26 yards to the Swain 32-yard line.  On the next play, Isaiah Evans, JV Braves running back, took it 32 yards to the house for Cherokee’s first score.  George Swayney caught a Tye Mintz pass for the two-point conversion and Cherokee led 8-6 with 13 seconds left in the first.

The Braves did get the ball back right before the half, but they were unable to capitalize as they drove deep in Swain territory but had an incomplete pass in the end zone as time expired on the first half.

Cherokee got the ball first in the second half at its own 35-yard line.  Mintz hit Holden Straughan on a 32-yard pass play that took them into Swain territory.

But, on the next play, Swain’s Shane Swimmer intercepted a pass and Swain took over at its own 33-yard line.  Cherokee’s defense rose to the occasion and held the Maroon Devils to a three-and-out. 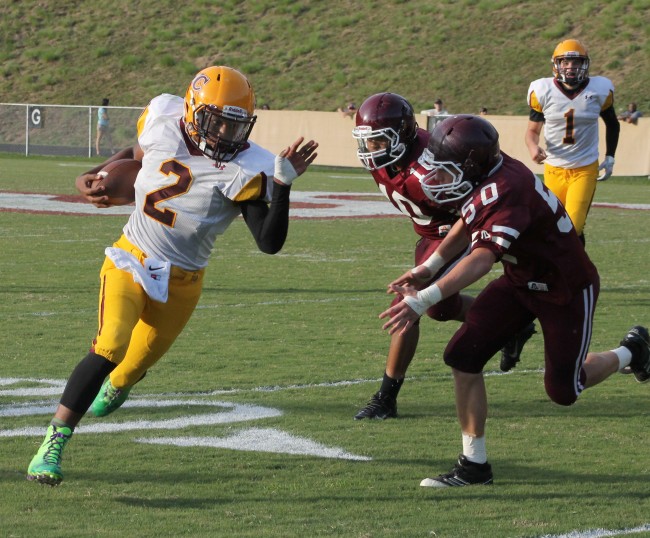 Isaiah Evans (#2), JV Braves running back, scoots to the outside en route to a 32-yard touchdown run in the waning seconds of the first quarter.

The Braves started their next drive at their own 32-yard line with just under five minutes left in the third quarter.  On second down, Tye Mintz ran around the left side of the Swain defense on a 64-yard touchdown.  The two-point conversion failed and Cherokee led 14-6 at the 4:23 mark of the third.

The next few possessions went back and forth between punts, several fumbles by Swain that were recovered by Cherokee’s Straughan, and Cherokee turning the ball over on downs with just over two minutes left in the game.

Swain took over at its own 32-yard line.  Following a first down run of 17 yards, the Maroon Devils found themselves within Cherokee territory at the 49-yard line.

On fourth down, Swimmer caught a 46-yard touchdown pass with 1:04 left in the game.  Following a holding penalty on the first two-point try, Swain was unable to convert on the second try and Cherokee held onto a 14-12 lead.

Swain tried an onsides kick, but Kyler Hill fielded the ball cleanly for Cherokee, pounced on it and effectively ended the game.  Cherokee was able to take a knee and run out the clock for the victory.

The JV Braves host the Murphy JV Bulldogs at Ray Kinsland Stadium on Thursday, Sept. 25.  It will be Homecoming Week for Cherokee with festivities held during halftime.

To view and purchase photos from this game, visit: http://onefeather.smugmug.com/SPORTS/FOOTBALL/JV-FOOTBALL-Cherokee-at-Swain/i-CjNDwBw