Brandon Buchanan, Braves quarterback, accumulated a total of 338 yards of total offense during a rainy Thursday night game against Rabun Gap (Ga.) at Ray Kinsland Stadium on Sept. 10.  Overall, the Braves had 360 yards of total offense, but it was not quite enough as they fell to the Eagles 41-26.

Brandon Buchanan (#9), Braves quarterback, bulls his way into the end zone on a 5-yard touchdown run late in the fourth quarter. He garnered a total of 338 yards of total offense during a special Thursday night game against Rabun Gap (Ga.) at Ray Kinsland Stadium on Sept. 10. (SCOTT MCKIE B.P./One Feather photos)

Kennan Panther, Braves leading tackler, led the Braves again in this game with 15 tackles, followed by Channing Lossiah with 12 and Logan Teesateskie with 11.  Normally a passing team, Rabun Gap switched to a ground game against the Braves and gained a total of 299 yards on the ground and 112 in the air.

Rabun Gap got going early in this game.  They took the opening drive and drove down the field culminating in a 2-yard touchdown run by Michael Bullard.  The two-point conversion was good and the Eagles led 8-0 less than 3 minutes into the game.

Cherokee turned the ball over on downs on their first possession.  After the punt, the Braves defense stiffened and held Rabun Gap to a 3-and-out, and Cherokee took over on its own 17-yard line following a punt.

The Eagles would get the ball back three plays later on an interception at the Cherokee 26-yard line.  Bullard would enter the end zone again on a 26-yard run on the first play of the possession.  Lenardo Tomadon added the point-after kick and the Eagles led 15-0 at the 2:47 mark of the first quarter.

The Braves fumbled on their next possession, and Rabun Gap capitalized with a 24-yard field goal by Tomadon to make it 18-0 three minutes into the second quarter.

Cherokee started their next possession on their own 20-yard line following the kickoff and marched down the field on an 80-yard drive that took seven minutes off the clock.  That drive culminated in a 10-yard touchdown pass to Jason McMillan with just a little over a minute left in the half. 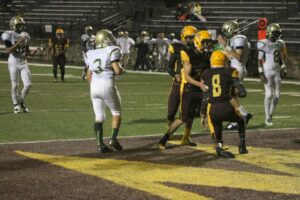 Brandon Buchanan (#9), Braves quarterback, bulls his way into the end zone on a 5-yard touchdown run late in the fourth quarter. He amassed a total of 338 yards of total offense during a special Thursday night game against Rabun Gap (Ga.) at Ray Kinsland Stadium on Sept. 10.

Cherokee’s two-point conversion failed and the Braves trailed 18-6 at the half.

Tomadon added a 26-yard field goal midway through the third quarter on the Eagles’ first possession of the half.  The Braves fumbled the ensuing kickoff which was recovered by Rabun Gap at the Cherokee 37-yard line.  Several plays later, Bullard ran in from seven yards out for his third score of the game.  Tomadon added the point after, and the Eagles led 28-6 at the 5:04 point in the third.

Following a 26-yard kickoff return by Benjamin, the Braves began at their own 31-yard line on their next possession.  Buchanan hit McMillan on a 32-yard pass play to take it inside Rabun Gap territory.  Three plays later, Buchanan hit Dustin Johnson on a 35-yard touchdown strike.  The two-point conversion failed and Cherokee trailed 28-12 with three minutes left in the quarter.

The Eagles coughed up the ball on the ensuing kickoff which was recovered by Cherokee’s Avery Davis at the Rabun Gap 34-yard line.  But, the Eagles would get the ball back on the very next play on an interception at their own 19-yard line. The Eagles were unable to move the ball, though, and were forced to punt, and Cherokee started their next possession from their own 16-yard line.

Several plays later, Buchanan hit Johnson on a 41-yard pass.  Johnson was stripped of the ball at the 2-yard line.  The ball bounced into the end zone and was pounced on by Cherokee’s Darius Blanton for a touchdown.  Buchanan hit Channing Lossiah for a successful two-point conversion and Cherokee only trailed 28-20 just nine seconds into the fourth quarter.

Rabun Gap started their next possession at their own 32-yard line and drove 68 yards which culminated in an 11-yard touchdown run by Bullard, his fourth of the game.  The point-after kick failed, and the Eagles led 34-20 at the 7:04 mark in the fourth.

Cherokee started its next possession on its own 28-yard line, but on the third play Bullard would intercept a pass and take it 48-yards for a touchdown.  Tomadon added the point-after kick and the Eagles led 41-20 with six minutes left in the game.

The Braves kept going, though, and after starting at their own 35-yard line put together a 65-yard drive that ended with a 5-yard touchdown run by Buchanan. The 2-point conversion failed and Rabun Gap led 41-26 with four minutes left in the game.

The Eagles were able to run out the clock and Cherokee dropped to 1-3 on the year.  Cherokee travels to Brevard on Friday, Sept. 19.