Tribal members among those earning GED® diplomas from SCC

SYLVA – Wearing her cap and gown for Southwestern Community College’s GED® graduation ceremony, Tonya Hensley, an EBCI tribal member, grinned nervously while recalling the moment she decided to turn her life around.

Her son, Calvin, had come to her one evening asking for help with his homework at their home in Whittier. Tonya had dropped out of Cherokee High years ago as a teenager, so she simply had no way to help Calvin with his studies.

“No, you’re not dropping out,” his mother replied.

That’s when the son laid down his trump card: “Why not? You did.”

So Tonya Hensley made a deal with all three of her kids (Calvin, now 16; Tiffany 13; Camille 11): If she went back and earned her GED®, they all had to stay in school. It wasn’t easy, but the 33-year-old worked her way through preparatory classed then passed all elements of her GED® last fall and officially received her diploma on Jan. 16.

Her family, including husband Josh Banks, were part of an overflow crowd that turned out for the ceremony at SCC’s Burrell Building.

Hensley is currently enrolled in spring classes at SCC as she decides between the college’s culinary and substance abuse treatment programs.

“I basically did it for my children,” Hensley said, fighting back tears. “It’s been really hard because my mom has cancer. She’s had four knee surgeries and two back surgeries.”

“I feel like she’s overcome a lot,” said Katie Ross, who along with Rebecca Patterson teaches GED® preparation courses for Southwestern on the Qualla Boundary. “It wasn’t easy, but she came because she wanted to set an example for her kids. This is not the end of her education; it’s the beginning. She’s one who really wants to do more.”

Hensley’s was one of many stories of resilience and determination on display at the graduation ceremony. One-hundred-fifty-three students earned their GED® diplomas through SCC in the fall, and 39 of them donned caps and gowns for the commencement event.

One of the oldest participants was 67-year-old Robert Squirrell, an EBCI tribal member living in Whittier. He’d gone through the 11th grade before dropping out to start working as a rock/brick mason. He now has a daughter, four granddaughters, three grandsons and a great grandson. 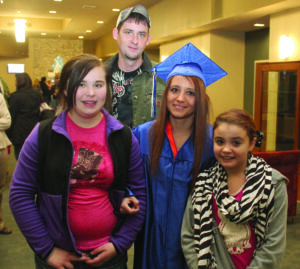 Surrounded by family, he grew emotional when asked about the evening’s significance.

“I’m speechless,” he said. “It means I can tell my grandchildren to get their education.”

Devonne Jimison, GED coordinator at SCC, said: “As you can see from these stories it is never too late to achieve your goals in life. Contact us today and begin the process of becoming one of our 2014 graduates.”

SCC has become a certified Pearson Vue Test Center and will continue to offer classes to prepare individuals to take the 2014 GED test.

For more information about the educational opportunities programs at SCC, contact Devonne Jimison at (828) 339-4486 or devonnej@southwesterncc.edu.