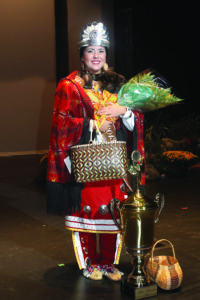 Shortly after her crowning, a tearful Crowe stated, “It’s an awesome opportunity.  I worked so hard for this, and I put in so many hours.  I just thank the Lord above so much for giving me this opportunity.  I will cherish it, and I will make my Tribe proud and my family proud.”

Crowe, 20, is from the Wolfetown Community.  She was a 2011 graduate of Cherokee High School and is a junior at Mars Hill University majoring in art therapy and art education.

Paige Jackson, 20, was named the Runner-up in the pageant and is from the Yellowhill Community.  She is also a 2011 graduate of Cherokee High School and a junior at Mars Hill where she majors in sports medicine. 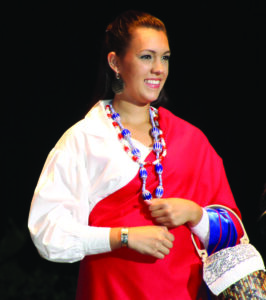 Saturday’s pageant was emceed by Eddie Swimmer, an EBCI tribal member of the Big Cove Community.  The festivities were opened by a prayer from EBCI Beloved Woman Myrtle Driver and the posting of the colors by the Steve Youngdeer American Legion Post 143 Color Guard.  Miss Cherokee 2012 Karyl Frankiewicz then sang “America” and Regina Swimmer sang “Amazing Grace”.

The pageant began with both contestants, in casual wear, introducing themselves and then speaking about their platform.

Crowe said she intended to create the Miss Cherokee Fierce Foundation to help build self-esteem and self-confidence among young Cherokee women.  “I want every girl on the Qualla Boundary to have the same opportunities I have had.  Together, if we work hard, we can build a better future.”

Jackson spoke about the Indian Adoption Act and the use of “The Basket” where Cherokee mothers and fathers were often encouraged to place their babies to give them up under the guise of being “unfit parents”.

“These babies were taken from their mother’s and father’s arms and put into the basket and taken away,” she said.  “My mother was almost a basket baby.”

Next up was the talent portion of the pageant.  Crowe spoke about traditional Cherokee medicinal cures and demonstrated the proper preparation of yellow root tea.  Jackson spoke about and performed the Cherokee Pheasant Dance.