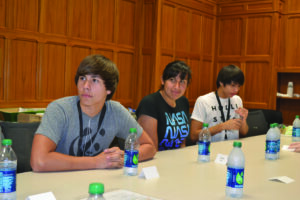 The students selected this year are:

Berg and Bushyhead will be joining the Aspirnaut™ program for their second year.  Last year, they were part of the inaugural program, sponsored by USET.  Berg recently graduated from Choctaw Central High School and has been accepted to Vanderbilt as an undergraduate for the fall semester. Bushyhead is a rising senior at Cherokee High School.

The remaining five students will attend Aspirnaut™ for the first time.  Denson is a rising junior at Choctaw Central High School (Mississippi).  Shumake will be a freshman at the University of Southern Mississippi this fall.  Lackey and Sadongei are rising juniors at Cherokee High School, and Will Martin is a rising sophomore at the University of Alabama.

Denson is working on making a video to help prevent diabetes in American Indian Youth.  “I am recording, taking pictures, and getting interviews of other teens.  I am going to edit them and add sound tracks to it,” Denson told USET about his work.

He says he wants to attend Cornell University and study veterinary medicine.  Coming from Mississippi to Nashville, Tenn., Denson adds he feels right at home, “It didn’t feel any different.  I guess I am used to it.  I don’t know how, I didn’t come from a big place, but I just feel used to it.”

Denson is working hand in hand with some research being performed by Bushyhead, who is working with ARC-GIS to plot data points on exercising while working in a human behavioral study lab at Vanderbilt.

Bushyhead, while in his second year attending Aspirnaut, has become a leader among the attendees.  “Maybe it’s because I speak up more or the others know I have been here before.”

His career goal is to become a pharmacist and open a pharmacy in Cherokee.

Shumake is working on sequencing data out of collagen.  He will attend the University of Southern Mississippi this fall.

Sadongei told USET he would like to continue his studies after graduating Cherokee High School to pursue mechanical engineering.  Berg says she will pursue an educational path to become a general practitioner physician.  Lackey wants to attend medical school, and Martin is attending the University of Alabama and is working with fellow undergraduate research interns separate from high school students.

The Aspirnaut™ Program at Vanderbilt University (VU) is working to encourage young rural students to reach their dreams while giving them resources and real life experiences in Science, Technology, Engineering, and Math (STEM) fields so that they may pursue careers as doctors, engineers, telecommunication specialists, math teachers and professors, and other related STEM career areas.  The program works to beam information, resources, and research back into rural classrooms so that it may involve younger students in elementary schools, high schools and collegiate undergraduates.  Over 800 students have been recipients of online conferencing and virtual laboratories.

The Aspirnaut™ program was started by Dr. Billy G. Hudson at Vanderbilt University Medical Center as part of a vision to educate and give advantages to rural students.  Dr. Hudson’s wife Dr. Julie Hudson, Vanderbilt University Assistant Vice Chancellor for Health Affairs, has a hands-on working relationship with the Aspirnaut™ Program and works closely with the students.  Dr. Julie Hudson told USET leadership, “We think that the partnership works well because it uses the assets of a research university and extends those to rural schools, rural teachers, and rural leaders in education.”

The Aspirnaut™ Program has collected data on all of its participants and monitored their progress after leaving the program.  There have been no dropouts recorded among the 43 high school students that have participated in the last four summers.  Twenty seven are seeking some form of post secondary training or are enrolled in college according to Dr. Hudson.

Hudson adds, “All but one or two of the 27 in college are enrolled in a STEM related field of study.”  Hudson says that the remaining 16 students are still in high school and engaging in advanced courses in math and science. “Our data is showing that students are making positive progress in the classroom and planning for education pathways past high school,” Hudson commented.

For several USET members the goal is to improve the standard of living.  The Aspirnaut™ Program works to gather a diverse group of students and create unique approaches in seeking solutions for challenges in science.  The students gain experience and possibly a new foothold in gaining acceptance to first rate universities.  Dr. Hudson says the hope is that these students will go into a field of science.  Regardless of the career pathway they choose, whether they become leaders, teachers, or administrators, they will have critical thinking skills, understand how to influence lawmakers on funding innovations in science that will make positive affects in their community, and become positive role models for the future.  Collectively, this translates into a growing and highly trained workforce for Tribal Nations.

USET Executive Director Kitcki Carroll echoes Hudson’s remarks saying, “We are most excited about what has occurred up to this point.  The relationship USET has with Vanderbilt is so important because it is a critical component to our overall Tribal Nation rebuilding efforts.  The educational opportunities for our younger generations are paramount to accomplishing our goals of rebuilding Indian Country.  We must always remember, in our efforts to rebuild our communities, that it is going to take all kinds of skill sets, all sorts of expertise.”

USET President Brian Patterson told Tribal Leadership it must do everything it can to provide resources to USET Tribal youth.  “We know when we invoke the power of a good mind in principle throughout our Nations that we do so with the future generations in mind.  We do so while talking of the future seven generations.  For the seven generations to meet their challenges, we must prepare our leaders of today.  We must give them all the strength, all the courage, all the compassion that we can so they can advance their generation and future generations.”