Spencer McCoy, an EBCI tribal member, was named Robbinsville High School Male Athlete of the Year for the second year in a row at their recent banquet. 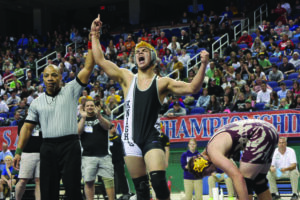 EBCI tribal member Spencer McCoy has been named Robbinville High School’s Male Athlete of the Year for the second year in a row. He is shown here moments after winning the 195lb. division state wrestling championship in Greensboro on Saturday, March 2. (Photo by Anthony Swearengin)

“I would like to thank everyone that has supported me and helped me along the way,” he said.  “I’ve had a blessed year as a two-time All-SMC linebacker, consecutive Smoky Mountain Conference 195lbs. wrestling championships and ultimately a NCHSAA State Championship.”

The sophomore won the Smoky Mountain Conference Championship, the 1A West Regional Championship and the 1A State Championship in wrestling at 195lbs. this year.  Last season, he placed fourth at the state meet.

He is also a stand-out football player.  This past season, he was the leading tackler for the Black Knights with 125 and he won the Varsity Football Coaches Award.  For the second year in a row, he was named to the All-Smoky Mountain Conference team as an inside linebacker.

McCoy added, “Being named Robbinsville Male Athlete of the Year for the second time is also a tremendous honor.  I couldn’t have done any of it without the Lord on my side.”

And, McCoy is no slacker in the classroom either.  For the second year in a row, he received both an EBCI Tribal Merit Award and a Robbinsville Academic Excellence Award.

His father, Skooter McCoy, commented, “As parents, Michelle and I are extremely proud of Spencer for many different things.  His strong faith, determination in the classroom and genuine heart are some of his best qualities.  Aside from his blessed work ethic and athletic ability, he’s truly a great kid first.  We’re thankful that his little brother and sister have such a positive role model.”