Principal Chief Michell Hicks started his Chief’s Family Garden Project in 2004 by distributing 350 garden kits to EBCI tribal members in the hopes of reviving interest in gardening.  Since then, the Project has distributed over 5,500 kits with 750 kits being distributed this year alone.

“It’s a great program,” said Principal Chief Michell Hicks.  “We’re doing over 700 kits this year.  We started at 350.  The best thing for me is to see all of the kids involved.  You see a lot of grandparents bringing their grandchildren through, and it’s just great.” 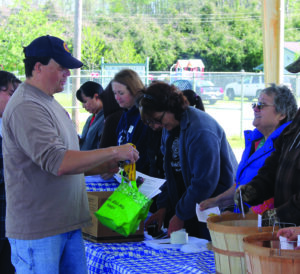 Over 400 garden kits were distributed on Saturday, April 20 at the Yellowhill Outdoor Gym.  Three other distribution events were held last week including ones in the Snowbird and Cherokee County communities and one at Tsali Manor for EBCI elders.

“People have been telling me that they are still just as thrilled with the garden kits as they were when it started, and many people have said they wouldn’t have a garden if it wasn’t for this garden kit,” said Sarah McClellan-Welch, EBCI Agricultural Agent.  “I think it’s still really important.”

She said budget cuts have not diminished the project.  “Our budget is about 1/3 of what it used to be, but we’re still providing 10 different kinds of heirloom garden seeds and a seedless red grape tree.  It’s just a really good project for the entire community.  For the past 10 years, we have seen at least a 60 percent increase in home gardening.”

McClellan-Welch said that ten years ago, they would visit around 20 gardens for the Summer Garden Contest and now they are judging between 60-80.  “There is a lot more of an increase in gardening because of this I think.”

Kevin Welch, founder and coordinator for the Center for Cherokee Plants, said that some of the seeds given out come from the Center.  “Cherokee people are agrarian in nature anyways and it’s what our society developed to be.  So, we try to keep that alive.  One of the things I say is that if you know what you put into the ground, you know what you’re putting in your body.  So, this is a way of keeping healthy, active Native communities.”

Welch added, “It promotes families…there are a whole lot more meanings than just gardening.  Families get together to work in the gardens.  They share the food.  They are passing on life skill sets so that future generations can learn to garden too.”

EBCI tribal member Patty Grant was elated to receive her kit on Saturday.  “I’ve always lived places where it wasn’t big enough to have a garden.  So, my sister and I plan on having one of those little raised gardens, and I think this (garden kit) is going to be wonderfully used.”