Cherokee’s Avery Mintz (left) dribbles up court in a playoff game on Friday, March 1 in which the Lady Braves beat Hiwassee Dam 67-55 to capture their third straight Sectional Championship. (Photos by Bear Allison) 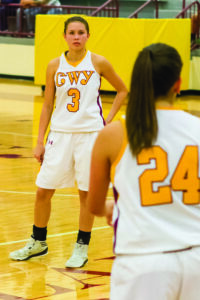 Mintz prepares to inbound the ball to Kendall Toineeta during Friday’s game.

The Lady Braves outscored Hiwassee Dam 19-12 in the first period and led 30-28 at the half.  Cherokee kept the pressure up in the second half outscoring Hiwassee Dam 37-27 to take the win and advance to the regional round of the state playoffs.