The Eastern Band of Cherokee Indians now has a full contingent of representation on the North Carolina Commission of Indian Affairs.  Sam Lambert took the oath of office from Cherokee Supreme Court Justice Bill Boyum on Friday, Nov. 9. 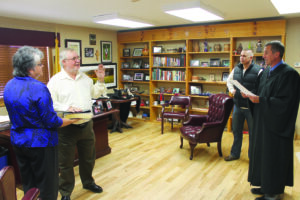 Lambert, whose term begins immediately and runs for two years, joins fellow EBCI tribal member Marvel Welch on the Commission.  Welch took her oath of office for the position in May.

“Sam brings a lot of experience to the table,” said Principal Chief Michell Hicks.  “He has been in education most of his life, not just higher education, but also in the school system.  He is also a veteran and we wanted to make sure we had coverage especially on the veteran side.  With Marvel, I think we have two really good selections here.”

“The more that our Tribe can become involved in state issues, I think the better off for our future and security.”

Lambert commented, “There’s stuff that can be done, and I think with the other member we can work together and work with the Tribes down in the eastern part of the state and have a good relationship.”

The next quarterly meeting of the Commission of Indian Affairs is scheduled for Friday, Dec. 7 in Raleigh.  For more information, Greg Richardson (919) 807-4440.