I once asked a fellow here in Cherokee why I did not see many hickory trees and he said, “You won’t see many above the road.” 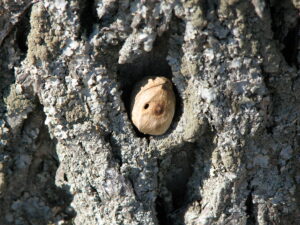 A hickory nut sits inside a hickory tree. (Photo by Vickie Matthews)

His point was hickory trees make the best firewood and a good tree would be cut for winter’s fuel. It is also a very heavy wood, so hauling one down the hill is a lot more sensible than hauling one up hill. Hickory has tough, durable wood which had a wide range of uses, such as tool handles, chair parts, and basket handles. The inner bark of hickory is good for finishing basket rims, and weaving a chair seat from that same inner bark will last for generations. But this series is about wild foods, and with that in mind there is a great reason to encourage more hickory trees: the nuts.

Hickory nuts are a highly nutritious and tasty food. They contain nearly as much protein as chicken and are a great source of minerals, especially calcium, magnesium, phosphorous, and potassium. They are also a good source of folate (folic acid), one of the vitamins important to expectant mothers.  Hickory nuts are high in fat, but it is really good fat. The bulk of the oil consists of monounsaturated fatty acids, the beneficial kind found in olive oil and avocadoes. Oils high in monounsaturated fatty acids tend to lower LDL cholesterol (the ‘bad’ cholesterol), prevent heart disease, and decrease insulin resistance, making hickory nuts a good food for diabetics. Even though they are high in fat, nuts are also considered great food for dieters.  The dense nutrients and fiber tend to satisfy hunger longer, lessening the urge for a snack. But be careful you don’t overdo it or you will lose those good effects.

If you have ever cracked hickory nuts, you know how much work it can be. The shells are very tough and picking out the nut meats is time consuming. One study determined it would take around eight hours of work to get enough calories to meet one person’s daily needs. However, this is where native technology made the process more efficient. Hickory nuts were cracked and the largest part of the shell removed. The remaining nut meats and pieces of shell were placed in the corn mortar (kanona) and pounded into a paste. The resulting paste was rolled into a large ball that was placed in boiling water to make a soup broth (kanuchi). The shells that remained in the paste would separate from the paste and sink to the bottom of the pot. So how much more efficient was the mortaring process than cracking and picking out the nut meats? The same study mentioned above found that using the corn mortar provided from 12 to 35 times more energy (depending on the type of hickory nut) than just cracking and picking. Now that’s good technology! And the taste? I once had hickory nut milk made in a blender. It had a great flavor and it was like sipping the finest cream. I can only imagine how good that soup tasted.