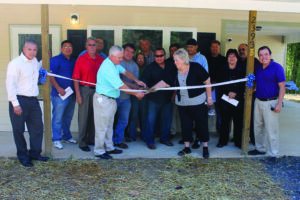 The Community was named in honor of Bill Ledford and Dan McCoy.

Principal Chief Michell Hicks said naming the Community after Ledford and McCoy is fitting.  “Those are two well-respected men.  They have accomplished a lot.”

Chief Hicks recognized the Boys Club employees for their work on the project.

“These type projects are what happen when you have a plan, and this Tribe has done a very good job of strategizing and putting plans together for the future of our people,” he said.  “Everybody knew this was the right thing to do, and that’s what good planning does.” 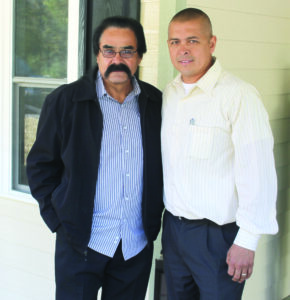 Principal Chief Michell Hicks (right) is shown with former Tribal Council Chairman Dan McCoy, one of the leaders for which the new HIP Community was named.

According to information from the Cherokee Boys Club HIP Office, a total of 139 HIP homes have been constructed in the past 10 years.

“I would like to thank everyone that was involved in it,” said Big Cove Rep. Perry Shell.  “Everybody from the HIP Committee to the Boys Club and all of the hard work they’ve done on that.”

Chairman Jim Owle related, “All of the Council and all of the HIP Committee had a vision here to purchase this property to try to get some homes on this, and it finally came to fruition.”

He thanked Tribal Council and the HIP Committee for their work and praised the work of the Cherokee Boys Club, “This project was going to be an 18-month project.  They finished this project in 10 months.”

Chairman Owle also praised the naming of the Community honoring Ledford and McCoy.  “What a fitting name they gave this for the service they gave to our community.  I had the pleasure of serving with Dan on Council, and he was a mentor to everyone serving on Council.  Dan, I appreciate the help you have given me.”

Birdtown Rep. Tunney Crowe thanked the Boys Club and HIP Committee, “We are here, as a Council, to help our people out and that’s what we’ve been able to do today.”