During the week of June 26-29, a diverse group of creative minds from as far away as Cape Town, South Africa, and Spartanburg, South Carolina gathered with local artists and writers for the 2012 KPEP Writers Workshop. Attendees included teachers, college students, homemakers, and other talented people with a flair for creativity. By the end of the intensive three and a half day workshop, KPEP had an entire pallet of fresh new stories to begin developing into books and materials for the New Kituwah Academy classrooms. 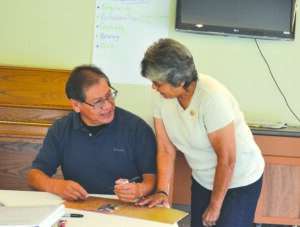 One thing that was done differently this year (as opposed to past Writers Workshops) was the use of the Standard Course of Study as an aid for the development of subjects. In this way, KPEP feels that this year’s Workshop will yield more useable books that will be able to meet learning objectives.

During the Workshop, participants were challenged to push their creativity through fun exercises led by the group facilitator, Kathy Davis of Moonshadow. Many surprised themselves with the quality of the work they were able to produce. Mid-week the group took a field trip to the Qualla Boundary Public Library, where Robin Swayney provided valuable information and examples to help the group. Participants were allowed to browse the children’s book section for new ideas and to better understand children’s literature.

On the morning of the last day, the group got a surprise visit from Principal Chief Michell Hicks, who signed copies of the 2012 Chief’s Book Project offering: The Elder Turtle. Later in the morning, Gilliam Jackson, who wrote The Elder Turtle during the very first KPEP Writers Workshop, came in to sign copies for the group. But Gilliam wasn’t the only Writers Workshop “All-Star” to sign books for the group- Jeffrey McCoy, who wrote The Big Journey of Little Fish (2010 Chief’s Book), and Garfield Long, Jr. and Billie Jo Rich, co-writers of Ogana In the Garden (2011 Chief’s Book), all signed copies of the books for workshop participants. Some of the recent stories in the Chief’s Book Project were chosen from what had been written in KPEP Writers Workshops in past years. While the Chief’s Book Project selections are printed in English, all stories used in Kituwah Academy classrooms are translated and printed for the children to read in Cherokee Syllabary. 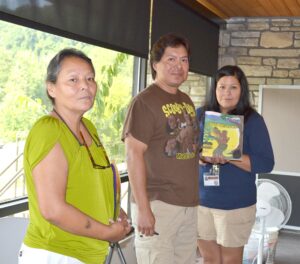 Betty Maney receives a signed copy of Ogana In The Garden from Garfield Long, Jr. and Billie Jo Rich.

The KPEP Writers Workshop grew out of a need for books and materials written in Cherokee for New Kituwah classrooms. Since materials written in Cherokee Syllabary are not as readily available as English materials, KPEP began the workshop as a way to produce original materials. All KPEP books are the result of the combined hard work of KPEP staff, fluent translators, and writers/illustrators. To date, KPEP has produced 50-60 original books, and this number is growing steadily.