Over 40 EBCI tribal members entered the Council Chambers on Tuesday, April 3 to hand deliver a letter to Principal Chief Michell Hicks asking for a special session of Tribal Council to discuss several legal issues they see with the upcoming alcohol referendum.    Some were wearing t-shirts with the slogan “We have come too far to die at our own hands”.  The letter was accompanied by 809 signatures. 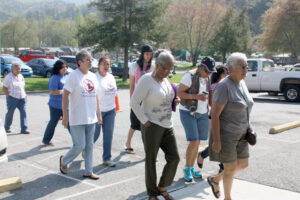 Over 40 EBCI tribal members went to the Council Chambers on Tuesday, April 3 to hand-deliver a letter to Principal Chief Michell Hicks requested a Special Council Session to discuss legal concerns they have with the upcoming alcohol referendum. (SCOTT MCKIE B.P./One Feather)

“After attending all of the public meetings, a lot of questions were asked about the legality of the referendum,” said Missy Crowe who said there have been “serious violations of Tribal law” involving next Thursday’s referendum.

“We feel this is an urgent request,” said Crowe.

In question are several points of Tribal law pertaining to referendums including Sec. 161-9(1) which states, “An issue that has been brought up before the eligible voters and voted upon by referendum/initiative may not be voted upon again until a period of five years have passed.”

Amy Walker was at the Council Chambers on Tuesday and commented, “We want to be heard on the laws that we feel that they are breaking.  The only way that we can get it if they call a special Council so that they can look at the laws and they can determine that yes, they are being broken and we should not be having this vote at this time because of the laws they created.”

Collette Coggins, TABCC chairperson, said on the issue, “We, at the Alcohol Board, are here to set the rules and regulations for the sale and control of the alcohol on the reservation.  “Our primary focus is regulation and administration of all the spirits on tribal land. We are not advocating for or against the referendum.  We are just trying to get everyone the correct information on the questions on the ballot.”

Blankenship commented saying that it is his opinion that the Casino vote was a separate issue than what is now being brought up.  “North Carolina allows alcohol issues to be voted on every three years and federal law requires us to conform to State law on certain issues.  I spent 30 years in the United States Army and would never fight to take away our people’s right to vote.”

As of press time, a decision on the request for a Special Council Session had not been made.  Check out www.theonefeather.com for updates as they occur.

One Feather staff member Elvia Walkingstick contributed to this report.