The Cherokee High School JROTC unit received 570 out of a possible 600 points to earn Honor Unit status at its latest inspection held last week.  Cadet Formal Inspections are held every three years and Cherokee improved from a Merit Unit status it received at the last inspection. 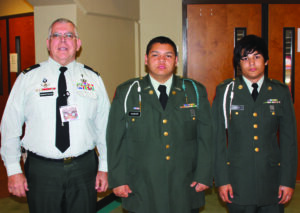 “As a whole, we will become an Honor Unit, which is one step from the highest,” said Maj. Bill Underwood, CHS JROTC Commander.  “It’s a big accomplishment for these cadets to be working this hard and get promoted like this.  It’s a big step.”

To celebrate the accomplishment, parents of cadets hosted a luncheon in their honor at the CHS Commons Area on Wednesday, March 14.

The CHS JROTC program had 32 cadets last semester and has 31 cadets this semester.  The cadets were well prepared for the inspection which was facilitated by personnel from Fort Bragg.

Cadet 2nd Lt. Leo Pete received the highest score in the briefing.  “I was the S5 and was in charge of all of the publications and the scrapbook throughout the year.”

Cadet Staff Sgt. Damon Taylor was one point behind the top score.  He was in charge of the weapons and the security of the inspection room.

Many other cadets contributed to the unit during inspection time including Cadet Master Sgt. Scott Everheart who served as operations officer and helped keep records and Cadet Staff Sgt. Dakota Goldsmith who served as the S4 officer in charge of inventory.

According to the regulations of the Army JROTC, the Cadet Formal Inspection Evaluation is based on the following:  Cadet staff briefing, curriculum knowledge, in-ranks inspection, Cadet attendance and participation, Cadet supply room inspection, records and administration, training management and security, public affairs, drill and ceremony, and color guard.