Commander Harding thanked everyone in the packed audience for their attendance.  “We are here to honor those that have served and to lift them up.  Let us rededicate ourselves to these veterans.”

The Post 143 Color Guard opened the program by posting the colors and then 10-year-old EBCI tribal member Jacob Sneed sang “America the Beautiful” in both English and the Cherokee language.

Darold Londo, a former Army helicopter pilot and graduate of the United States Military Academy at West Point, was honored with an America Legion Distinguished Achievement Award for his work in the community and as the general manager of Harrah’s Cherokee Casino & Hotel. 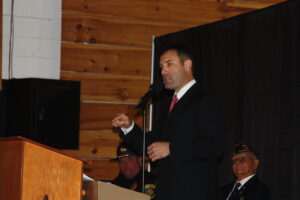 Londo has taken a new position within Caesar’s Entertainment, the parent company for Harrah’s, and will be leaving Cherokee soon.  He was Friday’s keynote speaker.

“Today is an anniversary to celebrate world peace.  We recognize that all our veterans have given something to protect our nation and some have given all.  We, the living, are the beneficiaries.”

Londo continued, “Let it be said that our veterans have been there for America defending our Constitution.  It is this devotion to duty that gives us all strength.  I always thought it was an honor to serve my country, here and abroad.”

Rod Cooper was honored with the American Legion Distinguished Service Award for his service on the Cherokee Indian Police Department and the DARE program.  Cooper achieved the rank of lieutenant in the police department and is a U.S. Army veteran. 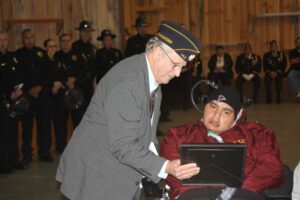 Warren Dupree, Post 143 service officer, was honored with the American Legion Leadership Award.  Commander Ernie Panther received the award on his behalf as Dupree was representing Post 143 at a Veteran’s Celebration at the Charles George VA Medical Center in Asheville.

A wreath was placed during the event to honor all veterans.  It was placed by Principal Chief Michell Hicks and Maj. Bill Underwood with assistance by former Principal Chief and WWII veteran Robert Youngdeer and Col. Robert “Bob” Blankenship.

For more images of this event, visit the One Feather photo galleries at: