The Swain Maroon Devils (7-1) rushed for 420 yards on Friday night (Oct. 7) as they defeated Cherokee (3-5) by the score of 49-7 in their yearly rivalry matchup.  Josue Otero gained 167 yards for Swain on 14 carries.  He scored three rushing touchdowns. 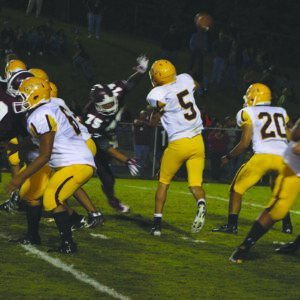 Swain’s Colby Hyatt completed 5 of 9 passes for 108 yards and two TDs.  He also ran for a score.

Caleb Queen led the way for Cherokee with 51 yards rushing on four carries.  Braves QB Ray Smith, who was named Braves Player of the Game by the coaching staff, completed 3 of 5 passes for 64 yards.

TE Greg Tisho scored the only points on the night for Cherokee with a two-yard run in the fourth quarter.

The Maroon Devils got things going early as they scored three touchdowns in each of the first two quarters.  Otero scored on runs of 25 and 33 yards and Hyatt ran for a 9-yard score in the first.  Otero added another score in the second quarter on a 15-yard run and Hyatt threw for two touchdowns (21-yard pass to Lee Pattillo and a 38-yard pass to Matthew Maennle).