The North Carolina Domestic Violence Commission works with various programs, including the N.C. Council for Women (CFW), to help combat domestic violence across the state.  Lynne Harlan, an EBCI tribal member, was sworn in as a member of the 35-member Commission on Wednesday, Sept. 21. 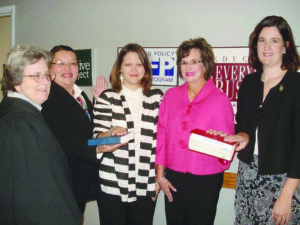 “It is an honor to receive the appointment to the North Carolina Domestic Violence Commission from Sen. Phillip Berger,” she said.  “I look forward to working with the Commission to support domestic violence programs at both the state and tribal level.”

Jill Dinwiddie, CFW executive director, had this to say about the Commission, “The work of the Commission is very important to citizens of North Carolina as we seek opportunities to improve victim services, increase public awareness, and inform legislators about issues impacting domestic violence survivors.”

According to information from the N.C. Dept. of Administration, the Commission “assesses statewide needs related to domestic violence and collaborates with the N.C. Council for Women to strengthen existing domestic violence programs.”

The Violence Policy Center (VPC) released a report on Tuesday, Sept. 20 that documented the number of females murdered by males in the United States in 2009.

“In 2009, there were 1,818 females murdered by males in single victim/single offender incidents that were submitted to the FBI for its Supplementary Homicide Report,” the VPC report states.  “For homicides in which the victim to offender relationship could be identified, 93 percent of female victims (1,579 out of 1,693) were murdered by a male they knew.”

The report goes on to state that of those victims who knew their offender, a total of 63 percent (989) were wives or “intimate acquaintances”.

For more information on domestic violence and its prevention, visit the CFW website www.councilforwomen.nc.gov.