Shan Goshorn, an EBCI tribal member living in Tulsa, won the AT&T Grand Prize at the 25th Annual Red Earth Festival’s juried art competition earlier this month.  Her piece, “Educational Genocide – The Legacy of the Carlisle Indian Boarding”, was finished just in time to meet the competition deadline and took the top prize as she won a ribbon, medallion and $1,500. 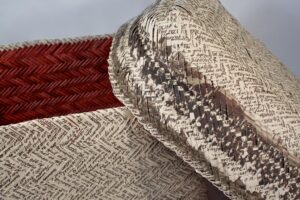 “As satisfying as the ribbon was for me, the weekend response was even more rewarding,” said Goshorn.  “I completely underestimated the impact that this piece would have on viewers, including Indian and non-Indian.  I was surprised that every native person seemed to have a connection to Carlisle, but it was even more surprising that everyone seemed affected by seeing the faces of those children woven into the lid.  I think that maybe seeing those children humanized this ugly, but critically formative, part in our collective history.”

The basket itself, a Cherokee-style double weave, was made from splints of paper showing Carlisle student’s names and historical documents and photographs.  A photograph of the Carlisle Student Body of 1912 was woven around the perimeter of the lid and is still readable as a photograph.  “I have never seen this done and neither has anyone that I have talked with.”

A close up of the interior of the basket.

Some of the splits are also from an address by Carlisle founder Capt. Richard H. Pratt. Goshorn related, “Captain Pratt is the one who coined the phrase, ‘Kill the Indian and save the man.’”

She said the emotional response to the basket continued all throughout the show.  “Some people were moved to tears.  The most touching response for me was when an elder came from Anadarko and after a long look said, ‘This piece belongs in a museum.  We need to let others know about our history.  This is now one of our national treasures.’”

A self-taught basket weaver, she has made five to date with two of those being in well-known museums – one in the National Museum of the American Indian in Washington and the other in the Gilcrease Museum in Tulsa.