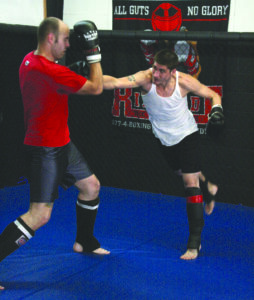 James Kanott, an EBCI tribal member and son of Dennie Kanott of the Birdtown Community, will be in his first Amateur Mixed Martial Art fight on June 3 in the Warrior Challenge at the Lancaster Convention Center in central Pennsylvania. Several of James’s training partners will be traveling to Lancaster for support and may also compete in the grappling tournament the following day.

During the months leading up to the fight, James has worked with his trainer, Clyde Dull, to get blood work completed for the fight as well as signing up for the fight. Clyde has been training fighters in kickboxing for several years at the Birdtown Recreation Center, and within the last five years several have entered Amateur competitions and one fighter had his first professional fight recently at Harrah’s Cherokee Casino.

The one thing that does stand out about James Kanott – he is one of the few fighters training today that is deaf. 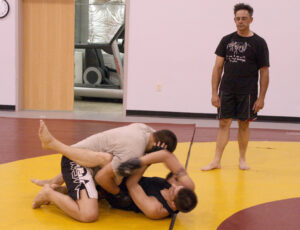 Clyde had just started training at the Birdtown Recreation center when a cousin of Kanott’s asked if he would allow someone with a disability to train.

For almost two years, James and Clyde have worked out their own way of communicating including: hand signals, showing the moves, and even writing down instructions.

Kanott has tried two other times to enter a local Toughman contest, but was turned away for being deaf.  This time, he will finally get his fight.

During the past year, professional MMA fighter and EBCI tribal member, Dan “The Handler” Hornbuckle has stopped by Birdtown for two training sessions.  James was able to get in the ring and learned a few pointers from Dan and remembers them to this day.

Dan lives in Mahomet, Illinois but keeps up with family and friends in Cherokee.  Upon hearing about James’s first amateur fight he had this to say, “That’s awesome, and I’m never too busy for my peeps back home.  First of all, tell him not to hold his breath. Stay in control of the fight. Set the pace and pull the trigger. No mercy, no mistakes, no prisoners. And, most importantly and last of all, have fun! Goes to both fighters and grapplers.”

Another training practice for James is getting to go to the Paleastra Gym in Sylva. The guys do not take it easy on him because he is deaf.

Blake Queen works out of that gym and commented, “Personally, I think he will do great. He has come a long way with Clyde’s tutelage and is well prepared for his match. I also think it is great that he has overcome many obstacles that most other fighters will never have to face in order to be involved in this sport. He is a great example of someone challenging and conquering adversity in pursuit of a goal or dream.”

Landon French, one of James’ training partners in Birdtown, commented, “It will be great to see James finally get a fight.  Working with him on ground and stand up, we both keep pushing each other.”

Cheyenne Arneach also trains with James at Birdtown and said, “I think he will do good in his fight.  He has improved a lot since he first started training.”

Area fighter Ryan Conn added, “He’s a good kid with the right mind set.  He’s got one speed and that’s full speed. He’s very strong and his grappling is good.  Having a handicap isn’t really a handicap for him.”

How long have you been training?

James:  One and a half years

How did you get started in MMA?

James:  Going to the gym to work out and saw others practicing.  I wanted to get involved.

I understand this is your first fight, how do you feel going into this fight?

James: It is my first fight and I am excited about it.

What have you been working on to get ready for your fight?

James: Kicking, running home from the gym, training at home when gym is closed.

Do you think your deafness will have an impact on your fight?

Do you want to have more fights?

How has MMA training impacted your life?

James: I set goals and try to achieve them, keeps me motivated

Do you have any other type of training?

What is your strong point? Standup or Ground?

What are you overall goals for MMA?

Do you see yourself as a role model for other deaf fighters?

Clyde Dull is married to Andrea Swayney of the Big Cove Community. He works for the Cherokee Boys Club and in the evenings trains fighters at the Birdtown Recreation Center. Clyde started martial arts at the age 19, has a 2nd degree black belt in free style Karate.  In his twenties, he had several kickboxing fights in New York.  About 12 years ago he got into grappling, but he is more of a striker. “You never stop learning.  I have students now who teach me things.”

How has it been training James Kanott for his upcoming fight?

Clyde:  Hard at times, he can be a bullhead, but it has been fun to work with him.

Is he your first deaf fighter?

How did you get him a fight?

Clyde: My brother knows a promoter in Pennsylvania who was willing to work with him.  We talked with him and the Pennsylvania Boxing Commission gave him the go ahead.

What are your main fight ideas for his fight?

Clyde: Keep it standing as much as possible

How will you handle working his corner during his fight?

Clyde:  I have been working with James for awhile now.  We understand each other pretty well, plus his dad will be there to sign if needed.

Are the fight promoters aware he is deaf and will they be able to maintain his fight at an amateur level?

Clyde:  Yes, they know.  The referees are professionals and should be able to handle it and James is a smart guy.  He should be alright.

What is James’ main strength as a fighter?

Clyde: I will say his punching. He is fast has good hard kicks.  His ground is not bad either, not real good at submissions but good at avoiding them.  His conditioning is good as well. He should do well.  I am looking forward to seeing him in the cage, hoping he doesn’t get too nervous with first fight jitters. It should be an exciting fight, I will probably be more nervous than him.