CULLOWHEE – Volunteers are being sought to help relocate rivercane from the Western Carolina University area to a site near Cherokee as part of the university’s Rivercane Restoration Project.

The work to transplant the rivercane will take place in March and April as volunteers pitch in to move the plants from locations near WCU to a patch of ground at the new Cherokee Central School, said Adam Griffith, a staff member in WCU’s Program for the Study of Developed Shorelines. 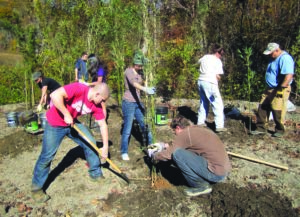 Volunteers from the Center for Cherokee Plants and WCU students and faculty plant rivercane at the Cherokee site in October. (WCU Photo)

Rivercane once was plentiful on floodplains and along stream banks in Western North Carolina, but the species has been heavily impacted by development, prompting a collaboration between WCU and the Eastern Band of Cherokee Indians to restore the native bamboo, Griffith said.

Rivercane is a mainstay of Cherokee culture, and traditionally has been used in making baskets, blowguns and mats. Not much rivercane still grows in Cherokee, so WCU students and faculty members started working with Cherokee tribal members last fall to move plants from the Cullowhee Valley to the site near the Cherokee school.

“Over the course of four days in October, volunteers dug up rivercane behind the baseball stadium on campus, wrapped the roots in plastic, loaded them onto a truck and replanted them in Cherokee,” Griffith said. “The dense network of tough underground stems and roots made the digging difficult, but the result was the planting of more than 50 feet of underground stems and 30 above-ground stems.”

A much larger rivercane transplantation effort is planned for March and April. “The long-term goal of the project is to establish a patch of rivercane on Cherokee tribal land that can be used for educational purposes and even harvesting by Cherokee artisans,” Griffith said. The transplanting work is scheduled for March 11 and 19, and April 1, 2, 8 and 9.

WCU’s Program for the Study of Developed Shorelines and Griffith have been spearheading the Rivercane Restoration Project for six years.

Individuals interested in volunteering to help with the project can find out more at rivercane.wcu.edu or by e-mailing Griffith at agriffith@wcu.edu. Area landowners who have rivercane on their properties that they would like to donate also are asked to contact Griffith.