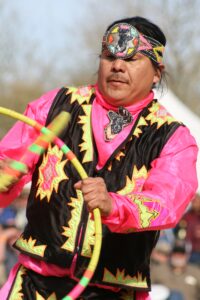 Daniel Tramper, an EBCI tribal member, took 2nd place in the Senior Division at the World Hoop Dance Championship held at the Heard Museum in Phoenix this past weekend. (Photo courtesy of Debra Utacia Krol/Heard Museum)

“I was really happy that I got what I got,” said Tramper.  “It always feels good to dance.  There is nothing like it and I am always glad to represent Cherokee.”

Four-time teen champion Tony Duncan (Apache/Hidatsa/Arikara/Mandan) of Mesa, Arizona, captured his first adult title at this year’s contest. In fact, four brothers from the Duncan family won or placed during the world championship. An estimated audience of 10,000 came to cheer on one or more of their favorites from a roster of 43 hoop dancers from the U.S. and Canada. The Jay Kahn Memorial Fund sponsors the youth competition prizes and the Arizona Commission on the Arts is a supporter of the contest.

Duncan scored 244 points to win the world championship, along with a cash prize of $3,500.

Hoop dancing incorporates speed and agility as dancers maneuver their bodies through one to more than 50 hoops. Dancers also integrate creative designs and difficult manipulations of the hoops to present a unique variation of the dance. In recent years, as hoop dancers continue to refine and grow their routines, the points scored have climbed, and the point spreads for the adult division continue to grow smaller.

In the Teen Division, Christian Hazell (Metis Nation of Alberta) from Calgary, Alberta, took the world championship home for a second time with 231 points. Sky Duncan, another of the Duncan brothers, placed second with 219 points and Chantika Hazell, younger sister of Christian, won third place with a score of 217 points.

Jensen (Navajo/Maricopa) of Dilkon, Arizona, packed a lot of punch into his pint-sized frame to capture his second Youth Championship title in a row with 239 points. The youngest Duncan to place, Talon, came in second with 231 points, while Qootsvenma Denipah-Cook (Tewa) of Ohkay Owingeh Pueblo, New Mexico, scored 209 points to win third place.