Yellowhill School Board Rep. passes away 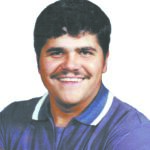 In the second tragic blow to the Cherokee School Board in as many months, James Edward “Eddie” Smith, 48, passed away suddenly on Sunday, Aug. 1.  Smith was the Yellowhill Rep. on the School Board and was recently named Vice-Chairman following Gloria Rattler taking the Chairman’s position after the passing of then-Chairman Kathy Wolfe who passed away in June.

“His death has been a shock to all of us as he was taken from us too soon, he will be greatly missed.  Our thoughts and prayers go out to his family and friends in the coming days.”

Smith was employed with the Eastern Band of Cherokee Indians as a public works inspector and was a member of Piney Grove Baptist Church.

Principal Chief Michell Hicks commented, “We continue to keep Eddie Smith’s family in our prayers.  We appreciate his life and his complete dedication to our Tribe.  Eddie was a kind and warm man who was always willing to assist our membership in any way and we will miss him greatly.”

Joyce Dugan, current Director of Education at Cherokee Central Schools and former Principal Chief said, “We are deeply saddened by the loss of two of our School Board members, Cathy Wolfe and most recently, Eddie Smith. Both served on the Board when the new school was being designed and constructed, a monumental task, but one of which they were most proud.  Cathy and Eddie served with dignity and grace on behalf of the school.  Most recently, when Eddie was complimented on his wise counsel on an issue being discussed, his response was, ‘I didn’t serve with Cathy Wolfe for seven years and not learn something!’  This was a tribute to Cathy, but also demonstrated how Eddie was quick to give credit to others.  We will miss them so much.”

The family of Smith requested that in lieu of flowers, donations be made to Eddie’s daughter to help with travel expenses related to a medical condition.  Donations can be sent to: Norma Smith, 256 Smith Road, Cherokee, NC 28719.