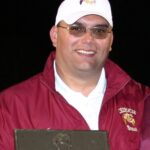 The winningest football coach in Cherokee High School history has resigned.  Skooter McCoy , who compiled a 49-16 record in five years at the school, resigned stating various reasons he outlined in a statement released to the Cherokee One Feather this week.

“I would first like to thank Cherokee Central Schools for giving me the opportunity to coach in the varsity football program for the past decade,” his statement says.  “The last five years as the head coach were as rewarding for me and my family as we could have ever imagined.  The success of our program along with having a positive impact on the tremendous young men involved will always have a special place in our hearts.”

McCoy compiled a 49-16 record in five years at Cherokee.

In addressing why he left, McCoy said in his statement, “Unfortunately, recent issues within the central School Board and administration, along with other internal problems, have brought me to the point of rendering my resignation as head football coach.  I stand firm in believing there will never be room for politics and personal agendas in high school athletics.”

He continued, “I would also like to state that never, at any time, did monetary negotiations become an issue.  This decision in no way was the result of a force out or ultimatum.  In the end, after negotiations with administration I just did not feel that the things I needed to keep Cherokee football at a consistent competitive level could be provided.”

McCoy brought Cherokee up to a high competitive level.  During his tenure, the Braves won 75% of their games.  In the years leading up to his arrival, they had won 43% of their games.

The Braves beat rival Swain County High School three out of his five years and set a school record for Consecutive Wins (12 in 2006).

“I have had the pleasure of seeing first-hand the love and concern that Coach McCoy and his staff have for the young men entrusted to them,” said Ray Kinsland, “The Voice of the Braves” who also serves as the team’s bus driver, chaplain and clock operator.  “Only the Lord knows how many youth they helped, not just in football, but more importantly in school and in life.”

Kinsland went on to say, “Coach McCoy is a great role model for our youth.  He gave up an excellent position and a much larger salary to return to the Braves as coach.  He, his staff, and his players worked very hard.  Yes, they won 75% of their games which is a great record which few others have achieved; however, the sportsmanship, manners, attitudes, brotherhood, respect, citizenship, and other accomplishments in our school and community by Coach McCoy, his staff, and his team are far more valuable than our statistics.”

Gloria Rattler, Cherokee School Board Vice Chairman, stated, “This was a decision that Mr. McCoy made and we (Cherokee School Board/Cherokee Central School System) wish him the best of luck and great success on his future endeavors.  We would like to thank Mr. McCoy for the services that he provided to our school system and to our children.  Thank you Scooter.”