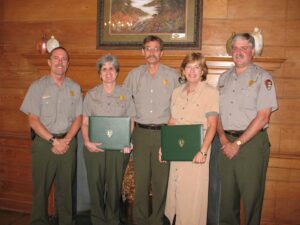 Vela’s recognized Cook for her “outstanding leadership in the overall planning and execution of the Elkmont Environmental Impact Statement/General Management Plan Amendment, the 75th Anniversary of Great Smoky Mountains National Park and her exceptional contributions to the National Park Service.  This was a highly controversial issue that involved stakeholder groups with divergent opinions on the beast alternative for Elkmont. Due to her leadership the process stayed on track through intensive review and public comment process.”

The process resulted in a decision that was accepted by the TN State Historic Preservation Office and the Advisory Council on Historic Preservation and calls for a balanced approach that both preserves the core historic resources and restores a large amount of the previously developed area to a natural condition.

Sumeriski was cited by Vela for: “his outstanding leadership in planning and execution of America’s Reinvestment and Recovery Act (ARRA) projects, the 75th Anniversary of Great Smoky Mountains National Park and his exceptional contributions to the National Park Service.  Mr. Sumeriski developed a comprehensive asset management program for the Park and realigned park repair, rehabilitation and construction priorities in a manner that articulated and justified critical needs.  With the passage of ARRA, 11 of the priority, “shovel ready,” deferred maintenance and highway projects were funded, totaling $78 million.”

The Park was highly successful in competing for and investing the $78 million – about 10 times the amount of funding that the Park receives in an average year.  Every one of those “stimulus” project contracts was awarded in record time to allow nearly every project to begin in the early spring to minimize disruption to visitors during the Park’s peak season.

Chief of Administration Losson was recognized for: “outstanding leadership of the Administrative Program at Great Smoky Mountains National Park and her efforts in planning and execution of America’s Reinvestment and Recovery Act (ARRA) for the National Park Service.  Losson worked collaboratively with park staff, Superintendents, the NPS Southeast Region and Denver Service Center, and the Federal Lands Highways Program to complete compliance, design and construction documents which resulted in the Park exceeding Servicewide goals for project contract obligations in the first 100 days.”

While responding to the urgencies imposed by the ARRA opportunity, Losson simultaneously provided leadership to the Southeast Region during extensive re-alignments of its Human Resource Management, Contracting and Administrative processes.

Park Superintendent Dale Ditmanson said, “I could not be more pleased and proud that these fine employees have received this well-deserved recognition.  Between the 75th Anniversary and the ARRA Program, we have asked a great deal of our staff at every level in the last two years. These three leaders, and all our people throughout the Park, have really risen to the challenge.”