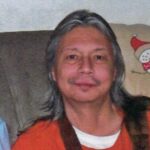 CHEROKEE – Howard Johnny Wright (Johnny Moe), 55, went home to be with the Lord, Monday, April 12, 2010 at his residence. A native of Cherokee, he was the son of the late Mary Helen Partridge Jones. He was an avid Harley Davidson Rider. He was preceded in death by an infant son, Jason Wright, and one sister Pam Crowe.

Funeral Services will be held at 2:00 PM Thursday at Bethabara Baptist Church. Ray Kinsland will officiate with Burial at Birdtown Cemetery.

Visitation will be from 6 until 8:00 PM Wednesday at Crisp Funeral Home where the body will remain until placed in the Church at 1:00 PM Thursday.